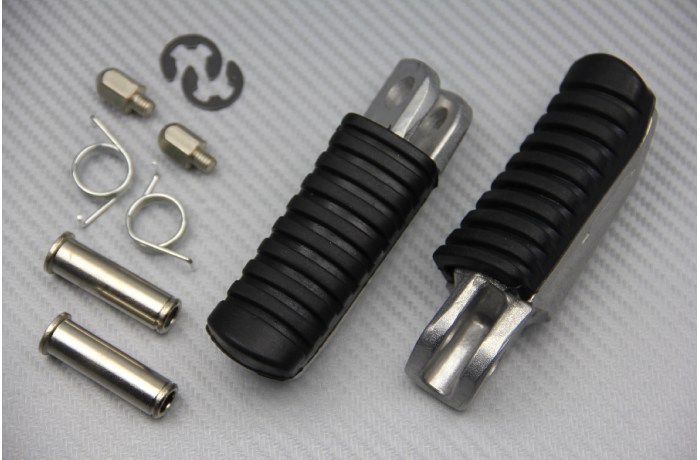 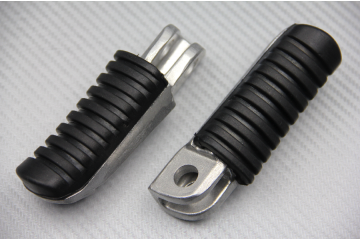 Pair of Front Footpegs for many KAWASAKI

Pair of front footrests, aftermarket model based on the OEM, specific for the following for many KAWASAKI (see compatibility list below).

Caution : these foot-pegs will perfectly, but in some case the provided hardware may not be a perfect match (depending on the motorcycle model). If so simply re-use the hardware from your past footpegs on ours.

Starting your motorcycling at full power (without preliminaries), rubbing your knee and elbow at every curve you encounter, taking every opportunity to hit a rear wheel or make a stoppy .... all this (and much more) are part of the pleasure of riding but it can sometimes have expensive results.

Indeed a poorly controlled start at full acceleration, a badly negotiated turn, a bad encounter with a careless driver, a badly placed crutch, or a basic accident can have negative consequences for your beauty… These are just a few examples of the many situations in which your motorbike can be harmed, and we hope that whatever you have been through the damages have been limited and did not impact more than your motorcycle (which is already a lot).

Or maybe, and quite simply, your new acquisition was used a little too much and with little care by its previous owner, or did not experience maintenance despite its miles of good and loyal services, and it now deserves a facelift before returning on the road ! Some people like to leave their motorcycle with a vintage look, others cannot stand to see their plastics tarnish, their alloy parts scratched or grated and see this rather as sloppiness that burns their eyes at each ride.

Anyway, and we have no doubt about it, it is with a heavy heart that you are now looking for new parts or accessories to heal the wounds of your motorcycle, to get it dressed as it deserves or to put it back on its two wheels as soon as possible, all without putting your bank account to the same fate.

Do not worry, AVDB Moto has thought of you as much as of your motorbike and offers you this pair of front foot-rests (driver), aftermarket models but with OEM specs. A complete kit, specific for the models mentioned above and which will install directly in place of your old ones, directy over the footrest bracket, without any modification to be made at the assembly.

The photos are representative of the kit as you will receive it, which is to say :

- The Comfort model, with a non-slip rubber pad that also dampens vibrations, for an optimum riding comfort.

- If you do not like its look, you can opt for the Sport model without rubber padding, also finer-looking. In addition to its more racing finish, it offers a significant extra grip at the end of the peg (quite useful for race track), which is not the case with the rubber coated OEM model.

If the fastening system is not provided or if the one you received is not perfectly adaptable to your motorbike, you just need to recover the ones from your old footpegs to assemble these new ones !

The perfect parts’ solution for purists, for those who want to keep their machine the same as when it got out of the factory, with the same specificities as OEM, but with a price much more respectful of one’s budget than from the manufacturer.

These foot-pegs will fit the following KAWASAKI :