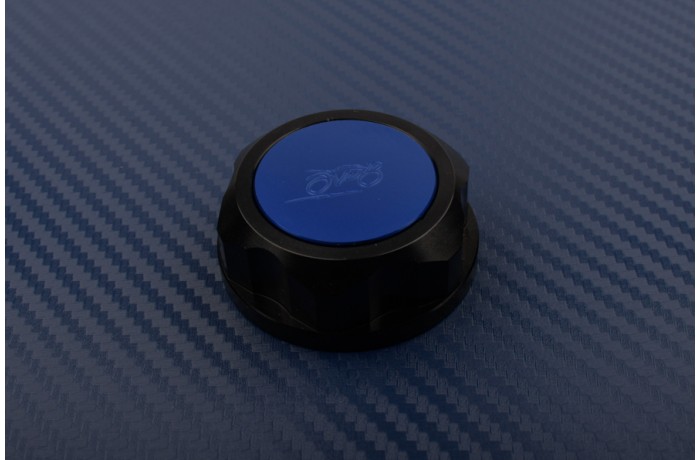 Steering stem nut for many YAMAHA models. You will find the motorcycles compatibility list below.

First of all, this is a steering stem nut, intended above all to replace the old, tasteless original cap, or that has been somewhat damaged following the (many) passages of the various keys it has encountered during the long life of your motorcycle.

Made entirely of machined and anodized 6061 CNC aluminum, it can be easily mounted directly in place of the old one without any modification.

But it is probably also much more than this if you want, because...

... Whether you want to give sobriety or extravagance to your motorbike, harmony or discontinuity, warmth or discretion or simply add your own personal touch, with our Unik accessories you can be sure you have the means to do so, whatever you are looking for.

Gone are the days when you had to choose between three small colors to customize your bike. With Unik, you now have 64 possible combinations per accessory. Now you can let your imagination run wild, end the “déjà-vu”, unleash your limits, or keep it simple if that is what you want. Unik allows you to go to the bottom of your vision of customization, leaving you with a large range of possibilities.

This Unik accessory, like all the others, is divided into two parts. You are free to recompose it according to your desires, in the colours you wish for a style that suits you.

And just as we took the time to take a picture of this accessory from its 64 possible angles, please take the time to look at the finished products, hundreds of photos are at your disposal to allow you to make the right choice for you.

How far will you go? With Unik anything is possible, and it is not just words but a reality: mix colours, combine them, play with asymmetry if you wish! It is up to you to decide, because the only limits are the ones you set for yourself.

For you, AVDB Moto has imagined, thought and designed its Unik products in France. A new concept that is explained in detail in our Range tab. By combining excellent manufacturing quality and offering you its new concept of customization, AVDB is committed to giving you the freedom to make your bike a Unik motorcycle.